Blown Up: Gaming and War

Interaccess is pleased to present Blown Up: Gaming and War, an exhibition in which three artists from different geopolitical positions in the distribution of war – Germany, Iraq, and the Palestinian diaspora – improvise strategies of engagement with the ever accelerating relationship of video games to wars. Harun Farocki's two-channel video installation Serious Games I: Watson is Down illustrates the ways that the American military use video games in the recruitment, training, and post-combat therapy of soldiers. In The Night of Bush Capturing: A Virtual Jihadi, Wafaa Bilal has modified a game that has been used in the ideological component of the battle between the American military and Al Qaeda. The subject of Bilal's intervention began with a widely distributed American made game where players hunt Saddam Hussein. In response, Al-Qaeda added a new 'skin' to the American game so that players hunt George Bush. Mohammed Mohsen's video game Weak, is a poetic exploration of the architecture of gaming and its impact on a colonized subject who grew up playing these games. Having experienced one of the few ineffectually censored access points to western media in Saudi Arabia in the 1980s, Mohsen suggests ways in which video games were a troubling source of pleasure and political anxiety.

Guest curator Vicky Moufawad-Paul has assembled this exhibition based on her interest in the ways that players' geographical locations and their relationships to power and violence transmute their negotiations with the screen. When a real war is happening in your city, for example Jenin or Baghdad, the public space of the outdoor playground is turned into a battlefield and the notion of video games representing a hyperreality is mutated. Farocki's installation turns our attention to the very real connection that persists between video games, simulation, potentiality, risk, and the ways that wars are waged and capital reproduced. The interventions of games like those created by Bilal and Mohsen refute claims that the spread of technology would simply homogenize cultures. Instead they demonstrate that various cultures are innovating technologies that better reflect their own subjectivities, that the flow of influence is multidirectional and further, that all cultures are contaminated by these ongoing polyphonic permutations.

Harun Farocki was born in Novi Jicín in 1944 in what is today the Czech Republic. Farocki is considered to be one of the most important artists of contemporary film and documentary. He has made close to 90 films, including three feature films, essay films and documentaries; in the 1990s he began to work with video installations as well. His topics are mostly political, archival and theoretical issues of the contemporary society. His work was shown at Documenta 12 in Kassel and in numerous international retrospectives and has received many awards. Farocki's early films are marked by ideas of a cultural revolution as formulated by the increasingly radical Left of the time and are explicitly developed as effective means of political propaganda. His subsequent auctorial, essayistic, and documentary films call for a more active reception on behalf of the audience itself. Parallel to this, cinematic essays arise, which question the very use of film as a pictorial medium. Through both montage and a deliberate composition of either intentionally filmed or found materials, Farocki produces a subtext, which opens up the technical, socio-political, and cultural contexts of meaning in the production, distribution, and reception of images.

Iraqi born artist Wafaa Bilal, an Assistant Arts Professor at New York University's Tisch School of the Arts, is known internationally for his on-line performative and interactive works provoking dialogue about international politics and internal dynamics. Bilal's work is constantly informed by the experience of fleeing his homeland and existing simultaneously in two worlds – his home in the "comfort zone" of the U.S. and his consciousness of the "conflict zone" in Iraq. Bilal suffered repression under Saddam Hussein's regime and fled Iraq in 1991 during the first Gulf War. After two years in refugee camps in Kuwait and Saudi Arabia, he came to the U.S. where he graduated from the University of New Mexico and then obtained an MFA at the School of the Art Institute of Chicago. In 2008 City Lights published "Shoot an Iraqi: Art, Life and Resistance Under the Gun," about Bilal's life and the Domestic Tension project.

Mohammed Mohsen is a Toronto based Palestinian visual artist. He has served on the Board of Directors of several arts organizations in Toronto. Mohsen has studied economics and Middle East area studies at the University of Toronto, and has completed a BFA in drawing and painting at the Ontario College of Art and Design University. Mohsen's current work explores dramatic abstraction of narrative. Using video games as a historic and aesthetic foundation, multidimensional and non-linear possibilities portray tensions of memory and history. Absurdity acquires meaning in the intimacy of nostalgia, amidst violence and tragedy.

Vicky Moufawad-Paul is a curator, video artist, and the Artistic Director at A Space Gallery. She holds an MFA from York University where she completed research on the visual culture of Palestine, a topic that she has published widely on. Earlier this year she curated screenings and discussions at 16 Beaver in New York City and at the Inside Out Film Festival in Toronto. She was the founding Executive Director of the Toronto Arab Film Festival, has been an advisor to the Toronto Palestine Film Festival, and has worked at the Toronto International Film Festival. Moufawad-Paul has exhibited her videos nationally and internationally. 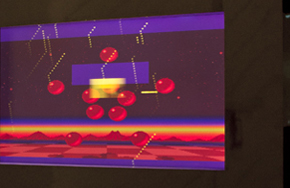 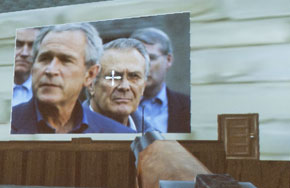 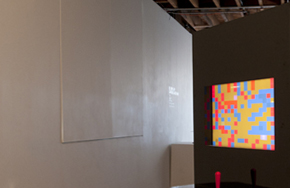